FOCUS: WHAT ARE LIGHTNINGS AND HOW TO PROTECT YOURSELF

Lightnings are electrical discharges that occur between two entities that have a very different electrical potential. They can therefore originate between clouds, or more commonly between a cloud and the ground. In Europe, the period with the highest probability of lightning is the summer season, considering the power of thunderstorms. 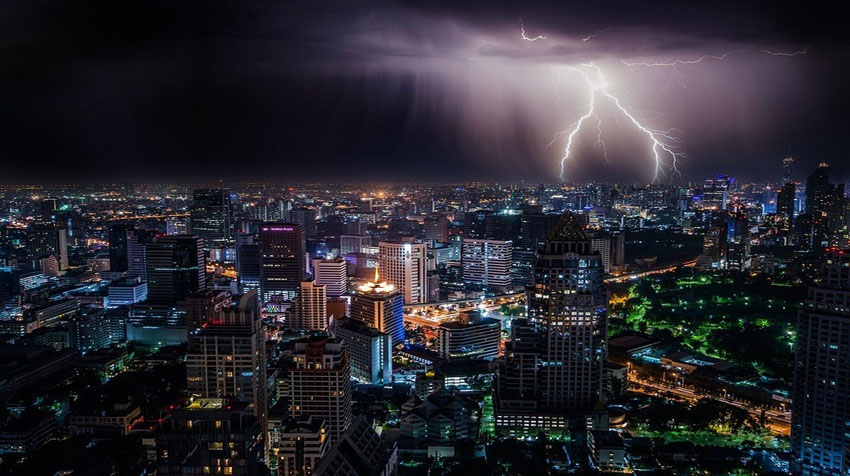 When do you risk to being struck by a lightning?

As said, the lightning follows the path with the least electrical resistance between a cloud and the ground. This path, however, does not always correspond to the shortest one from a geometric point of view. In fact, everything, including a person, that rises above the ground can become a vulnerable target for the lightning, shortening its path. The higher you stand, therefore, the greater chance of being struck. The biggest risks related to people are those associated to the possibility of being hit individually by a lightning.

There are however different ways of being struck by lightning:

The danger of the storm, and therefore the need to find a shelter depends on the storm proximity to the ground. If the time between lightning and its thunder generated is less than 10 seconds, it is necessary to find a shelter. In these cases, it is possible to protect yourself in a car, which discharge the electricity directly to the ground without hitting the cabin, or in a building (if protected by a lightning arrester device).

The risk of being hit, therefore, increases when you are close to very tall objects able to conduct the electricity discharged by the lightning. This is the case of electric poles, isolated trees, road signs; indeed, in addition to attract electric discharges, wood and metal also act as conductors. However, the best conductors are metals: its great conductivity allows electricity to spread over greater distances. During thunderstorms, therefore, it is advisable to move away from metal structures and avoid wearing metal objects or use umbrellas with a metal tip.

With their power, lightning strikes can cause a lot of damages. As for personal injuries depend on the electricity that has been transferred to the body. In most cases the current passes over the surface of the body, causing burns, scalds and external injuries. It is when the discharge crosses the internal body that the damage becomes more serious:

Lightning strikes can also cause several damages to the environment around us with consequences:

Useful tips to protect yourself from lightning strikes

The period in which lightning thunderstorms most occur is in summer. Additionally, not all areas have the same risk of lightning strikes, in Italy for example the greatest chances are concentrated in the Po Valley, in north Italy. However, it is always good to know the methods to prevent being struck by a lightning, because thunderstorms can also come suddenly, and there is not always the possibility of returning home.

Here are some useful tips to protect yourself from a lightning:

The overview offered so far shows how lightnings are a fascinating and dangerous phenomenon. These powerful electrical discharges, in fact, can affect people, resulting in serious physical effects. Even electrical systems are at risk during thunderstorms and they can be seriously damaged if hit by lightning. Therefore precautions must be taken to avoid damage and costly repairs.

ZOTUP was born with the intention of offering complete protection against lightning and overvoltages thanks to its surge arresters. Since 1986, ZOTUP experts and researchers have been working to offer the best solutions against this type of issues. The company values are clear and fundamental: people safety, their assets and their work environment; quality of products to keep what is promised to customers; continuous innovation to respond effectively to customer needs. ZOTUP surge arresters adapt to different needs and problems: in addition to the protection for civil and industrial systems, SPDs are provided for the protection of public led lighting, for the protection of photovoltaic systems, as well as limiters for signal and measurement circuits,data transmission and antenna, railway and cathodic protection systems. ZOTUP guarantees complete protection with low voltage, medium and high voltage surge arresters.

Choose the quality, the experience and the innovation of the ZOTUP surge arresters and SPDs.